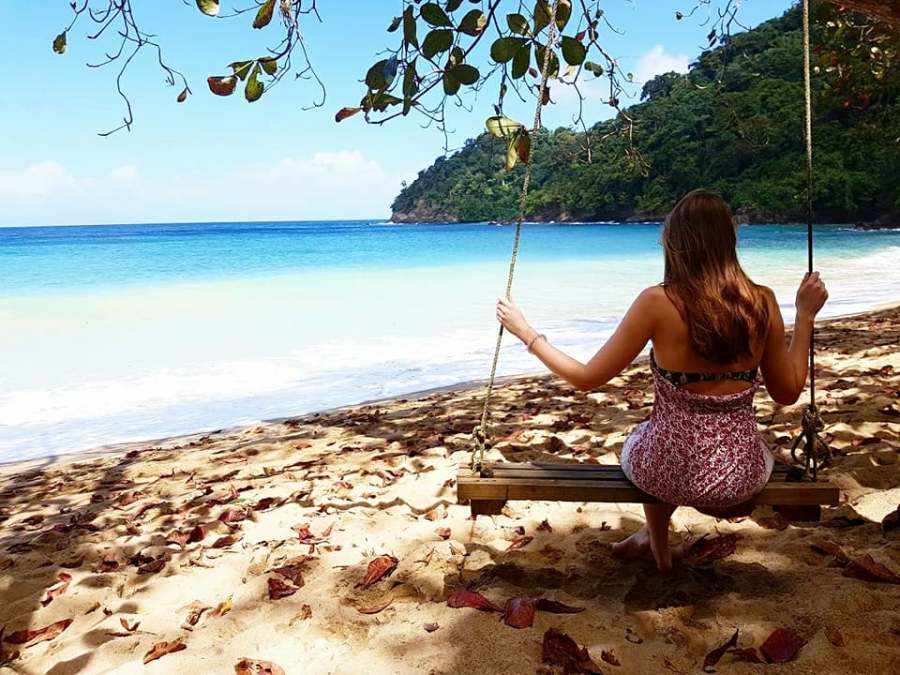 I’ve fallen completely in Love with Trinidad and Tobago! When I first moved to Leeds in 2015 I lived with my friend Kirstyn, who is from Trinidad. She told me all about her amazing country, and that is how, almost three years later, I ended up travelling to join her for two weeks in one of the most incredible places I’ve ever been!

Trinidad
Getting there
I flew direct from London Gatwick to Port of Spain, the capital of Trinidad, which took 10 hours. The flight was with British Airways and cost me £750. This is a pretty standard price for flying to Trinidad, and a bargain for Carnival time! There are other cheaper options, but these had long stopovers and take much longer than 10 hours. Flights also go direct to Trinidad from Miami, New York, and Toronto.

Visas are not required for British, Irish, or American citizens, however you will be given a slip of paper on the flight to fill out your passport details, name, address of where you’re staying, and contact number of who you’re staying with. I didn’t realise this until I was in the queue for passport control, and with poor wifi and signs everywhere saying you must not use your phone, panic set in! So make sure you know the address of where you will be staying before travelling there!

Where to Stay/Safety
I was lucky enough to stay with Kirstyn and her parents for the two weeks I spent there, but there are lots of hotels in Port of Spain such as the Hyatt, Hilton, or Radisson.

Trinidad isn’t the most touristic country I’ve ever been to (this was part of the appeal of the country to me, and the sunshine of course!). This does however, mean that if you travel to Trinidad, I’d recommend you go with someone who is from there or knows the country.

The best way of exploring Trinidad is by car. There are car rental companies at the airport, but always make sure you keep doors locked when driving or when first getting into your car, even during the day!

Things to Do
The Beaches! Port of Spain is about a 30 minute drive along winding roads and beautiful green hills to Maracas Beach. Whilst I was here, the beach was under construction as they were building new facilities here, so we ended up going to Las Cuevas beach, a beautiful stretch of golden sands a further 15 minutes from Maracas. Las Cuevas is a blue flag beach, and has lifeguards present. Always be mindful of your possessions whilst here, we took it in turns to swim so one of us would always stay to look after the bags! 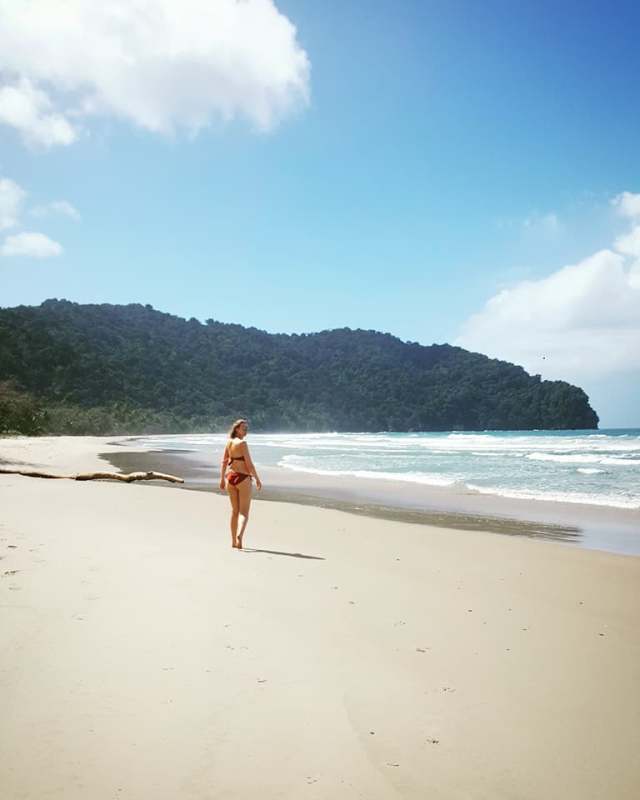 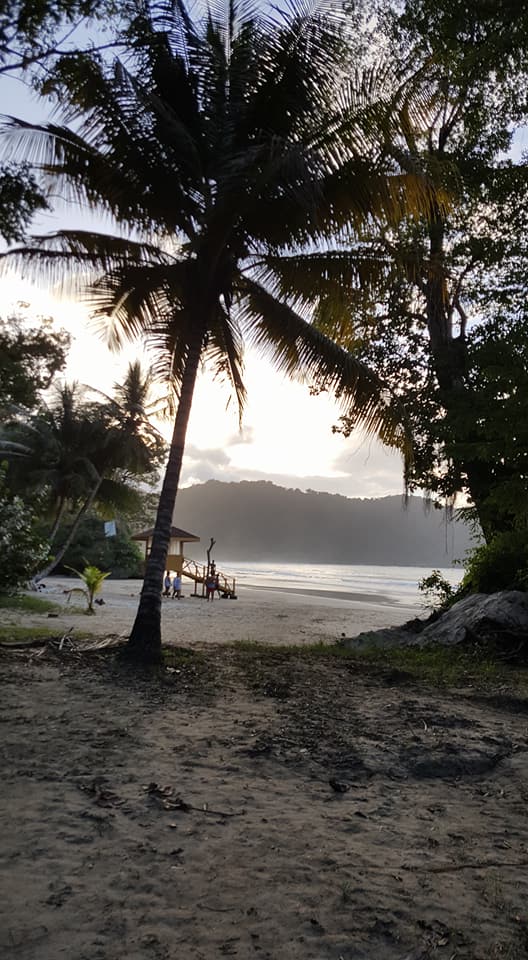 Down De Islands are a chain of islands off the coast of Port of Spain were people go to relax, fish, or chill in their holiday homes. One of the islands used to be a leper colony way back when! Kirstyn’s boyfriend Craig had a boat, so we spent the day fishing, sunbathing, and drinking gin, I was quickly getting used to this life! I even learned how to drive the boat (If you’re reading this dad, my dream of owning a yacht one day isn’t going away any time soon!) We stopped off at Scotland bay on one of the islands to swim, and there’s a rope swing to jump from if you’re feeling brave enough! We finished our day Down De Islands watching the sunset over the water, and even had dolphins come to join us!
NB: If you don’t have awesome friends who own boats, there are companies which run day trips Down De Islands from Port of Spain.

Turure Waterfall- Trinidad is filled with gorgeous waterfalls, perfect if you love hiking and having a refreshing swim after! We chose to go to Turure Waterfall in Valencia, a 1 hour 30 minute drive from Port of Spain. It’s an easy, gentle walk through the bush arriving at a series of waterfall steps varying in heights with pools for swimming in below.

Caroni Bird Sanctuary- The Scarlet Ibis is the national bird of Trinidad, a beautiful red bird which you can see in huge flocks at the Caroni Bird Sanctuary. This is a 25 minute drive out of Port of Spain, with boat tours leaving at 4pm. Keep your eyes peeled for snakes, heron, crabs, and the red capped Cardinal bird whilst you travel through the mangrove and swamp land!

Carnival! Of course I can’t miss out Carnival! But I will discuss it in full in a separate blog post as there’s so much to cover! 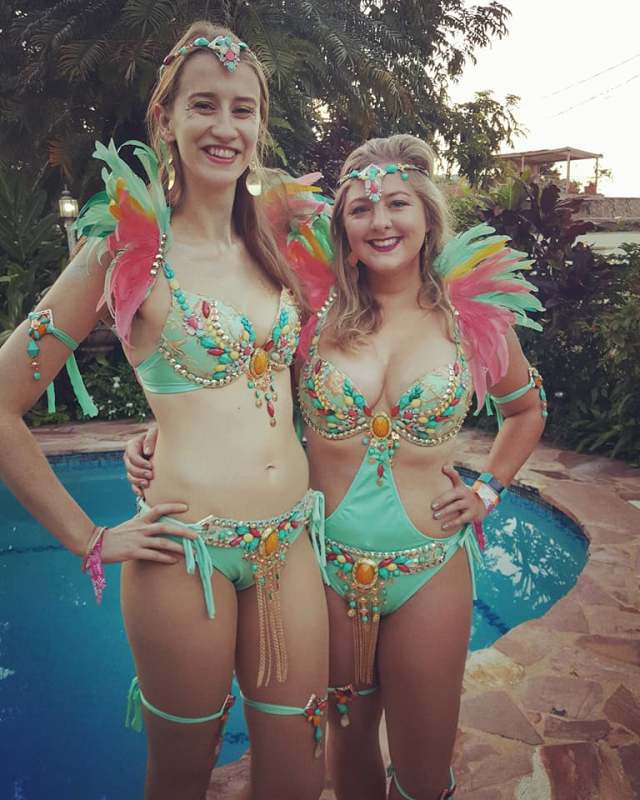 Food
I had previously tried some of the food native to Trinidad when Kirstyn had returned home for Christmas and arrived back to Leeds with a suitcase filled with Roti and pepper sauce, so couldn’t wait to try some more of the delicious and diverse food available.

Roti- This is one of my favourite foods. It consists of a wrap with potatoes and curried beef, chicken, shrimp or goat.

Pastelles- These are traditionally eaten at Christmas, and are made of cornmeal filled with beef, fish, chicken, or vegetables all wrapped up in fig or banana leaves.

Doubles- I had never heard of or tried doubles before, but Kirstyn repeatedly informed me that they were amazing, she was right! Doubles are made of 2 flat breads filled with curried chickpeas, mostly eaten for Breakfast or as a late night drunken snack.

Callaloo- This is a dish made of blended dasheen leaf. Don’t let the dark green colour put you off, it’s super filling and delicious!

Pepper Sauce-I can’t write about the Trinidadian food and not mention pepper sauce! My housemates are obsessed with it (my suitcase was filled with it coming home). If, like me you are just too Irish to handle the spiciness of the pepper sauce, milder options are available, or you can just stick to the equally delicious garlic mayo!

Chocolate- Trinidad has lots of chocolate making factories where you can watch how the chocolate is made and even try raw cacao.

Coconuts-Obviously not a native to Trinidad food, but one of my favourite things to do was go to the Savannah and drink fresh coconut water, followed by a snow cone. So refreshing!

Music
Steel-pan, calypso, and soca music provide a constant soundtrack to Trinidad and Tobago life. I heard it playing everywhere from the TV, radio advertisements, and of course during the whole of Carnival! It’s such happy music, you can’t help but dance (or wine) as soon as you hear it! Make sure to listen to Kes, Nailah, Machel Montano, and Patrice Roberts to name a few, to brush up on your Soca knowledge before arriving!

Tobago
Getting there
Tobago is a short 20 minute flight from Trinidad, and definitely worth a visit! We flew with Carribean Airlines on stand-by, as Kirstyn had been trying to book flights for months, but flights were booked up on their website. We had heard that most of these flights aren’t actually full a lot of the time, and there was a chance we could go on stand by. So after partying the night before until 2am (early by Trini standards), and having had only 3 hours sleep, we made our way to the airport. Thankfully we were successful! Our flight to Tobago cost $300TT, or £30 return. Flights also go direct to Tobago from the UK.

If you would prefer to go by sea, ferries go to Tobago from Port of Spain in Trinidad, arriving in to the town of Scarborough and take 3 hours.

Where to Stay/Safety
Tobago’s airport is located in Crown Point and is just a short walk to the centre of town. We stayed at the Crown Point Hotel which cost $392.50, or £39.25 per person per night. You can find cheaper options if you book in advance, but as we arrived on a stand by flight, we just rocked up to the hotel and hoped for the best and that they would have a room available!

Other hotels in Tobago include Grafton plantations, Coco Reef, or Summerlands.

Tobago is more touristy than Trinidad, therefore safer to travel to even if you don’t know someone who lives here, but it’s important to be aware of your safety and belongings when driving or at the beach.

Things to Do
Glass bottom boat trip- I’d definitely recommend going on one of these trips! The trip takes you to Buccoo Reef: a reef where you can snorkel through the coral. Nylon Pool: a beautiful blue sand bank set out right in the middle of the ocean where you can stand and swim. Princess Margaret visited here and said the water was “as clear as her nylon stockings”, hence the name! The final stop on the trip takes you to No-man’s land, a small island where you can stop for a swim, or barbeque. 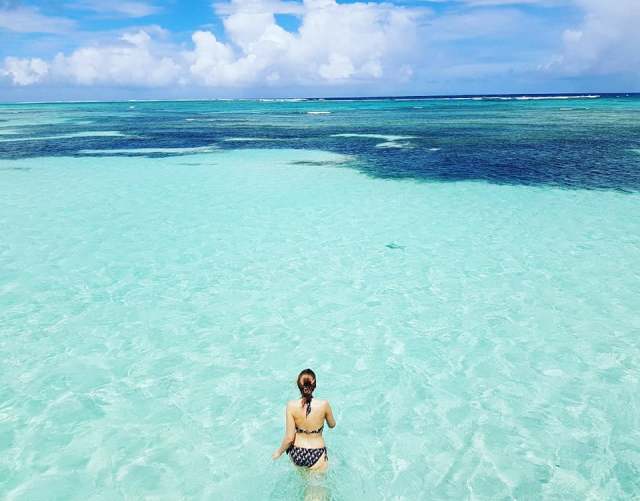 Rent a Car- The best way to explore Tobago is by car. I’ve never driven anywhere but the UK before, but driving through Tobago was super easy as they drive on the same side of the road as the UK, and most of their cars are automatic. We rented a car from Tobago Rental Association which is based at the airport for $300TT, or £30 per day.

The Beaches (Again!)- Tobago has beautiful beaches along the entire stretch of the West Coast. Mount Irvine is great for surfing, whilst Grafton is a beautiful stretch of deserted golden sands. We drove to English man’s bay, a 1 hour drive from Crown Point. It was beautiful! There’s a steep drop as you go in the water though, and the waves can get pretty big, something me and Kirstyn learned the hard way after being completely pummeled twice! Honestly, my life flashed before my eyes for a second!

Skewers- Not technically a ‘thing to do’, but skewers take away has the most amazing mix of Arabic food and is definitely worth a mention! We had a mixture of garlic potatoes, tabouli, chicken skewers and houmous here, so delicious!

Trinidad and Tobago has so much to offer, and if you get the chance to visit I’m sure you’ll love it just as much as I did! I’m definitely planning on returning at some point! If you have any questions about travelling there or this post, feel free to email me at cloverseasclaire@gmail.com. Happy travelling!

One thought on “Trinidad and Tobago”